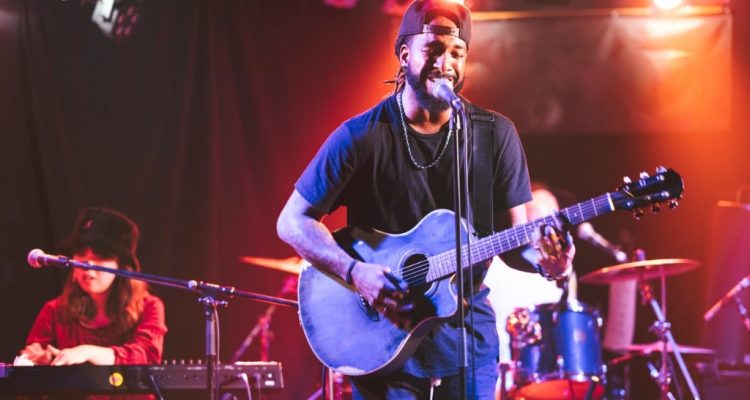 Why Do Musicians Wear Earpieces While Performing Live?

When you’re performing, you need to be able to hear what you’re singing or playing clearly. Usually, performers on stage are facing the audience. So instead of hearing the sound coming from the speakers, they hear whatever sound is bouncing off the venue’s ceiling and walls. This can make it challenging for the performer to do their job well.

This is why musicians have started wearing in-ear monitors. These devices provide a clear and direct source of sound to the musician on stage. They also eliminate many distractions that can impact performance.

The Evolution of Earpieces for Use With Live Music

Before in-ear monitors became a thing, musicians started using speakers facing them on the stage to play their music back to them so they could hear their own music better. The first known use of this was by Judy Garland in 1961. The early versions were at the sides of the stage facing in, what we would call side fills today.

The Beatles used this concept with Altec speakers in 1965. Soon after Bill Hanley, working with Neil Young and Buffalo Springfield, developed the floor wedge facing up at the artist. This was a great improvement, but as stages got louder, so did the monitors. Soon the levels were to a point that the artist’s hearing was likely to be permanently damaged.

The earliest version of an in-ear monitor was developed by 13-year-old Stephen Ambrose using a crystal radio in 1965. He continued development for years and created the first custom molded IEM using self-curing silicone for Stevie Wonder.

In 1982 Marty Garcia, working with Todd Rundgren and Utopia, developed custom-fit earphones, and in 1985, Utopia was the first band to use all IEM with no floor wedges. At this same time, Chris Lindop was also working on a version with Stevie Wonder and Howard Jones. All of the in-ear systems at this time were hardwired, which didn’t give the artist any freedom of movement.

In the late 80s Lindop put together the first wireless version using a 5 watt FM transmitter and a pocket receiver for Stevie. In the early 1990s Lindop and Martin Noah, an electronics engineer, formed Garwood Communications and developed the first commercially available wireless IEM systems.

Jerry Harvey was the monitor engineer touring with Van Halen in 1995. He created a two-driver custom molded ear bud for Alex that truly removed external sounds. By the late 1990s, most of the major acts were using the very expensive Garwood wireless IEM systems with custom molded earbuds.

The Benefits of Using In-Ear Monitoring Systems While Performing Live

In-ear monitors might look like molded earpieces or fancy earbuds. Whatever their appearance, they are supposed to create a seal on the performer’s ear to drown out crowd noise and isolate the music being played. Here are some of the reasons why they are so effective:

Because these devices fit snugly in the performer’s ear, they create a seal that blocks out stage volume and the sounds of the crowd. The fidelity of the device, in conjunction with the blockage of the external sounds, allows for high quality monitoring at much lower levels.

Sadly, musicians tend to suffer hearing loss at rates about four times higher than non-musicians. They also tend to deal with tinnitus issues. Any sound over 85 decibels for extended periods increases the odds of hearing damage. Stage volumes today can be in excess of 100 dB. In-ear monitors block out these amplified sounds and protect the wearer’s hearing.

Because each musician is wearing their own IEM, the sound is isolated per device as opposed to the performers having to sift through all of the music bouncing around the stage. So each musician can choose the individual mix that they want to hear. For example, singers want to hear mostly themselves, drummers may need to hear click tracks, to keep them on tempo, that others do not need to hear.

One of the major benefits of using in-ear monitors is that they can prevent vocal strain. When singers are unable to hear their own voice over the band’s instruments or the crowd, their first instinct is to sing louder to compete with it. IEMs reduce the need for the singer to strain their voice, which could result in vocal cord damage over time.

When you have speakers on the stage pointing back at you, some of this sound can be picked up by your microphone. This is likely to result in annoying feedback. Even without feedback, wedges on a stage can negatively impact the sound that reaches your audience. When performers use IEMs, they get the playback they need directly into their device, so what the audience receives is a cleaner experience without the possibility of feedback.

Stage monitors and wedge speakers take up a lot of space and involve tons of wires. They also aren’t efficient because the performer only gets their mix if they are directly in front of the speaker. In-ear monitors are completely portable, meaning the musician is free to move about the stage as much as they wish and can even walk around the audience. They are also lightweight and easy to pack up and transfer to the next gig.

Why Singers Might Remove Their Earpieces During a Performance

You’ve probably witnessed a singer or two pull their earpiece out in the middle of a performance. There are several reasons this might happen:

It is important to never use just one earpiece, the stage sound will be so loud in the open ear, that the one in the other ear will need to be turned up to levels that are very dangerous for your hearing. For this reason many performers have microphones tha6t are dedicated to pick up audience sounds and only go to the IEM.

What Are Your Options for In-Ear Monitors?

You have several options when it comes to both the earpiece and the wireless system. Earpieces can be single or multi driver. They can have silicone or foam tips in different sizes or even be custom molded for your ears. They range in price from less than $100 to several thousand for the high end custom molded multi-driver versions. Wireless systems also vary greatly depending on features.

Galaxy Audio offers a range of wireless in-ear personal monitors that work in a variety of live performance and recording environments. These systems are used by some of the top performers in the music business. Galaxy Audio has been supplying musicians, recording technicians, and people who just love good sound with high-quality equipment for over 45 years. Contact us today for more information about our products.

How Does a Sound Level Meter Work?