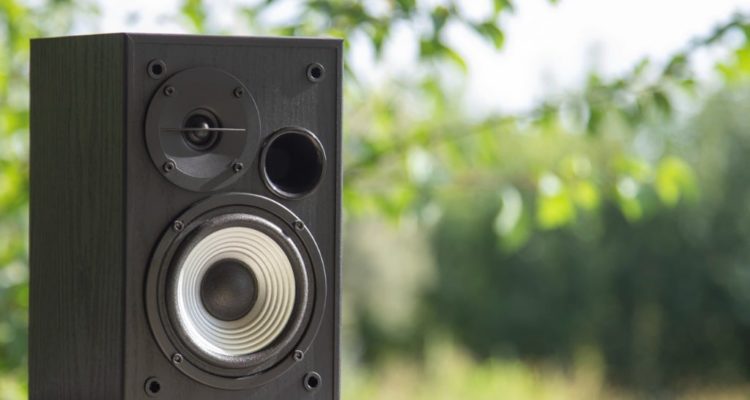 Loudspeakers, also known as transducers or drivers, come in various sizes and styles. Their purpose is to turn electrical audio signals into acoustical sound waves that we can hear.

The most common design type is the moving coil loudspeaker. It uses a permanent magnet, a voice coil, and a cone. The voice coil sits in the magnetic field of the magnet and is attached at one end to the cone. The electrical audio signal is sent to the voice coil from an amplifier. This electrical signal is an alternating current, just like the electricity in your house.

When the voice coil receives this current, it becomes an electro-magnet. Since it is an alternating current, it changes the poles, north and south, and causes the coil to be attracted to or repelled from the permanent magnet. This changing of polarity moves the coil, and the cone that is attached to it, back and forth.

The cone moving back and forth is, in turn, pushing and pulling the air, thus creating sound waves. The number of times per second the cone moves out and in determines the frequency, or pitch, of the sound.

It is difficult for large cones to move quickly, so they are used for low frequencies and are called woofers. Much smaller cones are used for high frequencies, as they can easily be moved quickly. These are generally known as tweeters. The woofers and tweeters are used in combination in a speaker system to more efficiently cover a wide frequency range.

The Main Parts of a Loudspeaker

While you don’t need to know the makeup of speakers to listen to and enjoy them, it’s helpful to understand how they are made if you plan to use them professionally and spend money on them.

Creating a baseline of knowledge about loudspeakers can help you understand why they respond and create the sound they do, as well as assist in troubleshooting problems. Here are the main parts of a loudspeaker and their purposes.

The History of Loudspeakers

The first speakers were invented by Johan Phillip Reis in the early 1860s for use in telephone designs and later expanded upon by innovators like Thomas Edison and Alexander Graham Bell. But the current coil system wasn’t established until the early 20th century, forming the basis of the speakers we use today.

By the 1930s, manufacturers began looking for ways to improve the overall frequency and power response of speakers for use in large PA systems and movie theaters. Later, speakers with multiple drivers and better materials for the magnet, enclosure, and cone were employed.

How Speakers Make Sounds of Varying Volume and Frequency

When a speaker’s cone vibrates a lot, it creates louder sounds and vice versa. This is a simple concept to understand with regard to varying volume, but frequency is different.

Why a Bigger Speaker May Not Always Be Better

Generally, if you want a speaker to make more noise, it has to be bigger in size. Why? Because the sound a speaker makes is related to the amount of energy it releases into the air. A bigger speaker has a larger cone that can release more energy per second.

But the biggest speakers aren’t always the most powerful, especially with how far technology has come. Measuring speakers by watts can be misleading. Instead, it’s a good idea to look at the sensitivity of a speaker, which is how much noise it produces per watt of power at a distance of one meter. The higher the sensitivity, the more efficient the speaker is at producing sound, regardless of its size.

How to Find the Right Loudspeaker for Your Needs

Investing in the loudspeakers with the best sound quality and configuring them correctly for your needs will provide a better listening experience and make mixing live sound easier. Reproducing live sound requires consistent coverage and reliable performance throughout the listening area, so it makes sense to invest in professional-quality loudspeakers. If you’re unsure where to begin, here is how you can find the right loudspeakers for your needs.

1. Permanent vs. Mobile Use

Your first consideration will be whether you will install the speaker permanently, such as at an event venue, or use it on a mobile basis.

How many loudspeakers you need will also vary. A basic sound system might only use one. For example, a coffee house performer would do just fine with a single speaker. But if you have multiple instruments or vocals on stage, you will likely want multiple loudspeakers for more coverage and varied sound reproduction.

Make sure the loudspeakers you choose can cover the largest venue you’re likely to use them in. There’s a big difference between a coffee house and an outdoor amphitheater.

How loud do you want your loudspeakers to be in your largest venue? It’s vital that the loudspeakers you choose can handle your peak volume.

Do you already have amplifiers and mixers? Most items are compatible, but you want to make sure that whatever loudspeakers you purchase will be compatible with your existing systems.

Galaxy Audio has been in the audio equipment business since 1977. We are recognized worldwide as a leader in precision audio technology, and our products have graced the stages of some of the music business’s biggest stars.

Our reputation for creating superior audio equipment and our dedication to innovation has withstood the test of time. Whether you need loudspeakers, microphones, amplifiers, or other high-quality sound equipment, Galaxy Audio can help!

2.4 GHz vs Bluetooth vs UHF

You have several different options when it comes to wireless connectivity. Which option you choose…

Cardioid vs Omnidirectional Mics: Which One Should You Choose?