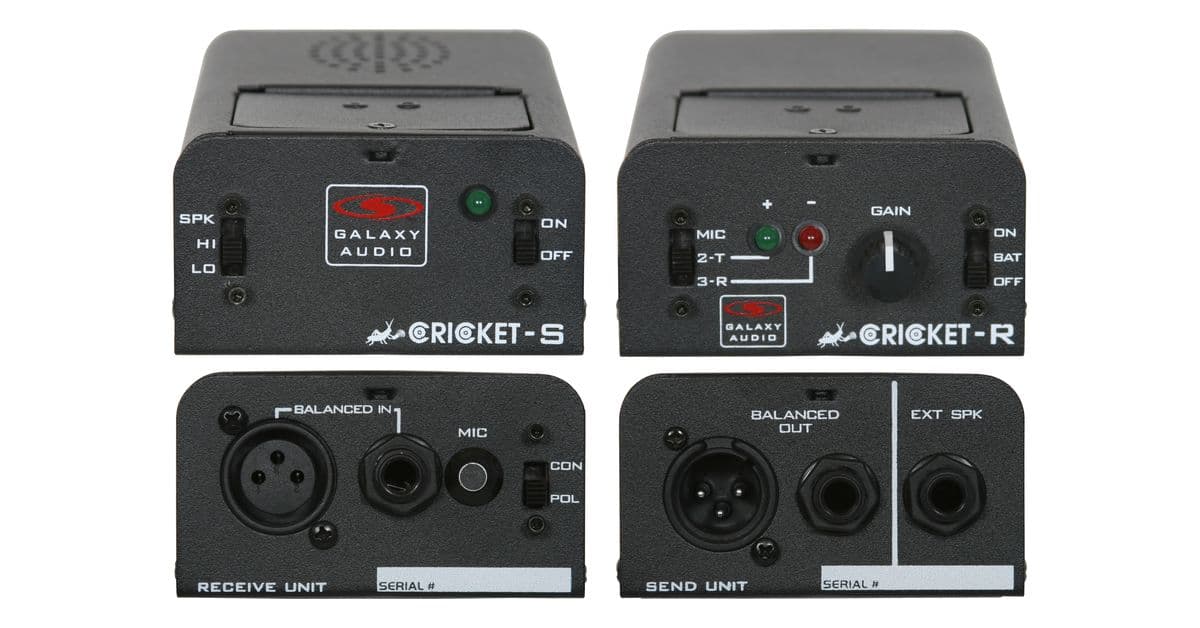 The Galaxy Audio CRICKET Speaker Polarity/Continuity tester is great for sound contractors, musicians, DJs, and many others. Polarity, should it become reversed, can play havoc with a powered active speaker. If two sources are emitting the same electrical or acoustic tone (frequency), and one of those sources is in a state of inverted polarity, those tones, when combined at a given point, will cancel each other. This severely alters the sound of a system.

Polarity can be reversed while soldering cables, adding components to a sound system, reversing ‘Banana’ plugs, or replacing a component in a speaker cabinet improperly, to name a few instances. The purpose of the CRICKET is to test the polarity of a sound system each time it is used to ensure it is working properly.

Galaxy Audio’s battery-powered speaker CRICKET Polarity/Continuity Tester Set makes it easy to determine whether every component in an audio system from patch bay to console to speakers is in or out of polarity. The CRICKET tests balanced and unbalanced cables of up to 2,000 feet in length. It will drive a “snake” (even one with transformers), and indicate which of a microphone’s XLR connector pins is hot. The Galaxy Audio CRICKET speaker polarity tester can also plug directly into a speaker cabinet and drive the components. A glance at the CRICKET’s red and green LEDs can save hours of troubleshooting. No wonder it’s an indispensable tool for sound system owners, operators, installers, and sound rental companies.

The CRICKET Polarity Tester is a two-piece unit (‘Send’ & ‘Receive’). The Send unit generates a ‘pulse’, which is sent through the speaker, cable, microphone, or the device being tested. The Receive unit interprets that pulse and indicates if that pulse is positive or negative. The bottom of each unit has a quick reference guide on how to understand the readings given. The CRICKET Polarity Test Set is easy to use, necessary to own, and not a lot of money. The CRICKET speaker phase tester is suggested for anybody working with sound systems.

“The Galaxy Audio Cricket is a lifesaver- allowing simple or very complex systems to be checked for phase all along the signal path.

The Cricket has been in my toolkit for over 20 years and during that time has checked and helped me phase multiple amplifier stacks for Megadeth, White Zombie, Stephen Stills, Bon Jovi, E Street Band, Paul Simon and The Who.
We have also used it to solve the “mysteries”of rental equipment and house PA’s sometimes finding simple cabling faults which had remained undiscovered for years.

When all your “stuff” works together, it works its best.”