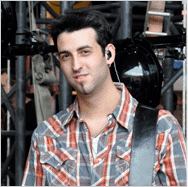 Mike Adkins, guitarist for Uncle Kracker, grew up in Livonia, Michigan, a suburb of Detroit. Born in 1983, he began learning classical piano at the young age of 8 years old. Just a few years later, he moved on to the guitar, which would become his passion for the rest of his life.